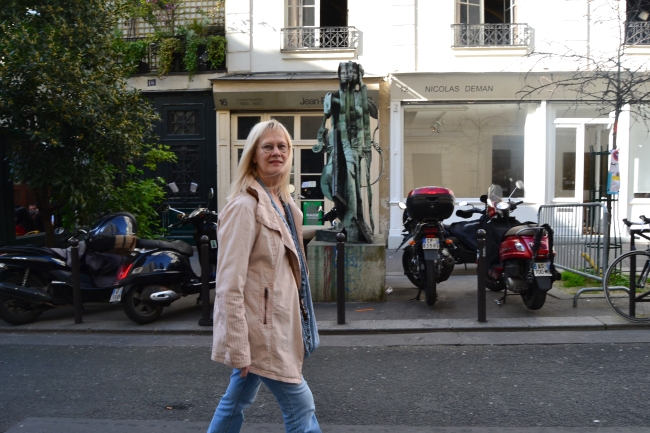 Brigitte Wagler is German, lives in Paris since 1973, she dreams may be with a pencil in her hand, but the eye is not a camera for her, it’s the screen. As for the camera with its functions it is mostly a third eye, the spiritual eye, of the mental. She reads Gilles Deleuze in the text, she let speak the memory, she is the archaeologist of her knowledge, she let free tirelessly a profusion of symbols and signs. She is situated in margin of the aim of the language and by the same from the center of her play.

She is getting herself apart from an intellectual painting which the unique aim would be the significance. For Brigitte Wagler, it is no more to look to give paintings of representation of the visibility, but to give expressive equivalent materials, the icon sign not being identical in nature to what it is significant, she tries to figure visually the sensitive order or the intelligible order by a construction of shapes and of colors whereas the proposition is not more the representation of the subject, but its Expression.

This work of transformation of the proportions, the balance of powers between the full places and the empty surfaces, produces visual equivalents, readable, affective, intense acting of the feelings of the looker like a striking gong. The language of the imaginary, of the Eros, the spring out of the word, esthetical language which makes a sign; is an action on the status of the shape.

The work is open, the looker is plunged into the ambiguity of many simultaneous readings. This unknown proposes the adventure (his) .It is the birth of the world.